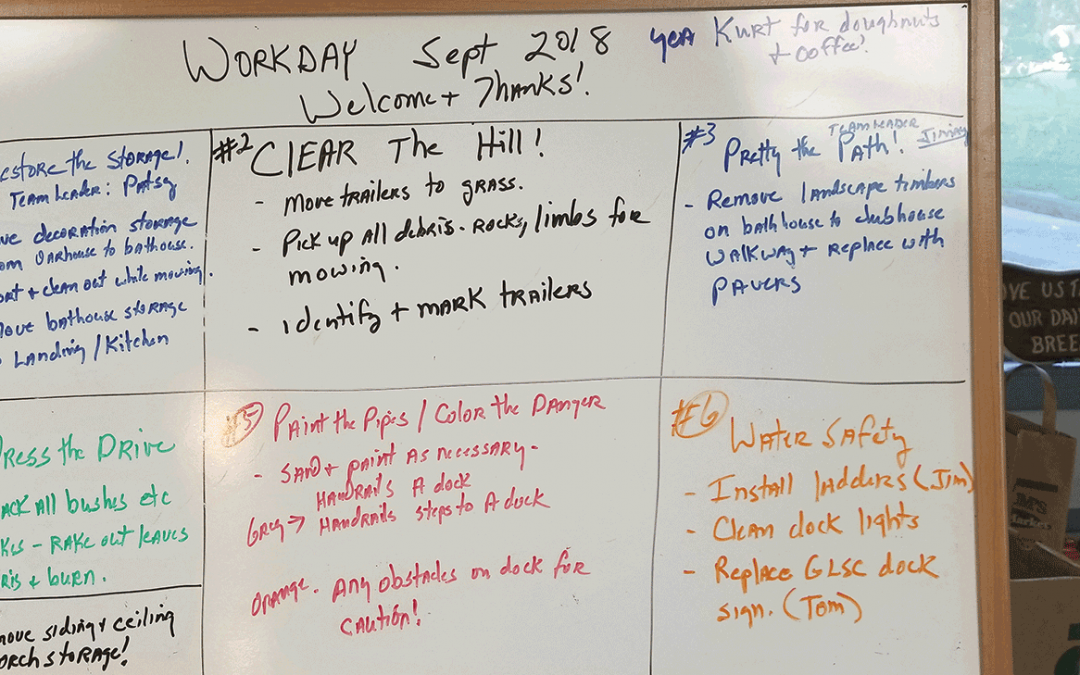 Doughnuts and coffee supplied by Kurt Hagen were rapidly consumed while everyone perused the 6 potential projects on the whiteboard in the clubhouse.

It wasn’t long before paint cans popped open, shovels and picks were flying, and boats and trailers were being moved on the hill.

the bath storeroom and sorting and moving decorations from the Oar House into the newly cleaned space. There appeared to be several trips to the ol’ dumpster!

Up on the storage hill, five or six men were busily moving all the trailers (those that could be moved) to enable a general cleaning of 12 years worth of leaves and debris. They did a great job and increase the debris pile by a factor of two! All agreed it was a bit windy to start the debris file on fire.

Down on the docks, a handful of folks with sandpaper, scrapers and paint brushes were

steadily applying grey paint to handrails and everything else required while several people were using a bright yellow paint to mark out every place on the docks defined to be a potential tripping hazard.

Also down on the docks, Jim Spears was finishing up his safety swim ladder project. He is certainly to be commended for the huge number of hours spent to fabricate and install a large number of welded ladders for club members safety!

The biggest project of the day was the removal of the rotting landscape timbers on the walk between the clubhouse and bathhouse and the installation of very attractive landscaping blocks. These guys did an incredible job as evidenced by the images.

Another group utilizing chainsaws and trimmers cut back all the overgrown brush along the launch drive, hauling all debris to the aforementioned debris pile.

Right at noon, everyone stopped for a group picture and pizza! Read Commodore Terry Casady reminded everyone about the upcoming Dam Race and Commodore Tom White introduced the beginning planning and discussions being held for a possible clubhouse upgrade.

Commodore White was supposedly sighted utilizing a chainsaw to cut up the top of the fallen tree out by the campsites.  That’s hard work!

Post lunch saw the final touches and clean up of projects and pizza.

All in all, it was the general consensus that this was one of the best work days for the club in quite a while.

Many thanks for all who participated in making their club an even better place to be!

Mark your Trailer and your Dock Box

If you have a trailer in storage at the club you are required to have it marked with your name. According to the bylaws, trailers and boats in slips must be maintained or can be removed. You can get stick-on letters at any hardware store and if you have a dock box, put your name on it as well.

License Stickers Due by June 30

It’s time to renew your boat license and put the sticker on your boat.  At last count there were 30 boats with expired stickers the oldest being 2010. (Just imagine the fine for that!)  Make sure your boat is legal and displays a current sticker.